This is the second of a few catch-up posts, to give an idea of where my crime reading ranges.

Of course, the British are acknowledged masters of all kinds of crime fiction.  Conan Doyle, Agathe Christie, need we say more?  Well, yes, and this select list barely scratches the surface of this deep pool.

A late-breaking fave for me is Christopher Fowler's Bryant and May series. These are a must for any anglophile or London-ophile or really anyone who admires brilliant eccentricity. They verge on the too-cute, so if you don't like humor, esp. the British kind, steer clear of Bryant and May.  That said, the later ones get rather darker at times and that helps to keep the cute in check. They are also so drenched by a topically narrow flood of intellectual minutae (London history), that one can drown in the details.  But what an enjoyable way to go.  The culinary notes here that stick here, truly, are obscure British boiled sweeties, and Arthur Bryant's West Indian landlady Alma (who cannot cook according to Bryant, but does, quite a bit).  Fowler's next installment starring the indomitable and apparently indesctructable duo is due out in March, hoorah.

In a rather different vein, yet still very very British, is Charles Todd's Ian Rutledge series. Classic village mysteries starring Rutledge and his hant, Hamish. The conceit of Rutledge's WW1-generated shell shock manifesting itself as a the ghost of a man whom he executed for dereliction of duty is inventive, proper in an English way, and just shivery enough to keep you on guard as you read. Here's an interview with Rutledge himself.  One must drink gallons of tea while reading an Ian Rutledge novel., and look forward to thick buttered toast served in farmhouse kitchens. None of the anglophilic pleasure of these books is diminished by the realization that Charles Todd is actually a mother-and-son writing team living in North Carolina.  What fun they must have researching and writing these novels.

I don't think those creepy ones set in the English churches count here, Phil Rickman's Merrily Watkins series. The premise is that Merrily, the parish priest in a postcard perfect English village, is also an exorcist of sorts (although that term is a bit dramatic for the locals), and apparently there is loads of dark and evil stuff just sitting under that picturesque frosting, with which Merrily must do regular battle. They grabbed my attention for a while but ultimately I found them providing not so much a frisson of creepiness but a shrug of depression.  Lighten up, people.
Ian Rankin is a fave author among those who follow British crime, and I've just read the first in his John Rebus series, Knots and Crosses. Edinburgh this time (so, technically not a Brit but let's call it the UK until they get that indepedence vote), and again working the theme of exposing-the-dark-underside-of-a-beloved-city, a bit like Rickman above.  But while Rankin's Rebus is as depressed a detective as one can run across in this literature (maybe only surpassed by Kurt Wallander), he's a little nastier than Merrily Watkins, and since you can't blame the bad stuff on the underworld or the afterworld or whatever they call it in the border country, the story is far more compelling.  It is also better-written.  I look forward to reading more of these.

And finally, in a complete departure from Rebus, I recently read Charles Finch's A Beautiful Blue Death, the first in a series starring a Victorian gentleman sleuth named Charles Lenox.  Here we are back in England in her glory days, height of the Empire, country houses, urban gin pots, lords and ladies, etc.  It could all be a bit twee, but just when it threatens to settle into costume drama, Finch manages to move the plot along with a brisk twist, and he's a pretty good writer for a Yalie.  I confess a certain pleasure at settling in with Lenox this winter, since his genuine delight in a good cup of tea in front a roaring fire is so very evident from the start.  I could do with less of his lady friend, since it is only her wealth and station that permits her to operate so independently (his too, for that matter), so readers who are offended by class-consciousness should look elsewhere for their 19th sleuthing.

This is obviously a very short list.  Ranking them on a pure enjoyment scale, I'd probably say Fowler, Todd, Rankin, Lenox.  Writing-wise, mybe Rankin would top this list.  Fowler and Todd have new ones out or coming out, and I want to read more Rankin and Benjamin Black (if we include Scotland here, maybe Ireland?).  That's going to be a lot of tea.

Update:  I'm realizing that I left a couple off of here.  John Lawton's Frederick Troy series gets a lot of love from the critics, I gather.  I read Second Violin, which is the sixth book in the series, although it offers the backstory for all the others, so one can read it first.  Didn't take to it - too many plot lines, cliffhanger-y chapters, and a hero who has a lot gals on strings.  It felt much shallower than I had thought it would.  Still, people love these, so maybe I'll try another someday.

Finally, I tried out Peter Lovesey's Peter Diamond series, set in Bath, England, with The Last Detective.  Another that really didn't stick.  Diamond is supposed to be hard-boiled and gruff, but doesn't really have any other character traits as far as I can tell, and lacks the introspection of other hard-boiled but more complicated detectives such as John Rebus or Salvo Montalbano.
Posted by Splendid Spatula at 8:39 AM No comments:

It is hard to imagine, if you think about it, that life in North Korea is really as bleak as we hear.  Come on, this is the developed world!  Between those two screaming economies of China and South Korea!  Korea, for chrissakes, that place is on fire culturally, economically, educationally, you name it.  Surely there is some seepage over the border, it can't be THAT bad. 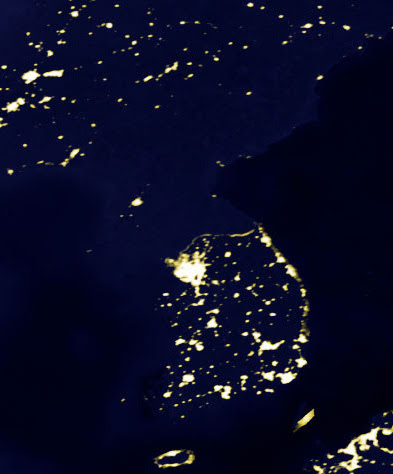 This is a famous image, a satellite view of the two Koreas, at night.  The big dark patch is North Korea.  You can find the picture all over the internets; this copy is from thestranger.com.


Then you read an Inspector O novel by James Church who purports to have been an American intelligence agent who has operated in North Korea, and you think, huh, maybe it really is as bad as all that.  Especially in this, the third of the series, following A Corpse in the Koryo and Hidden Moon.  Bamboo and Blood is set in the dead of winter, and the prevailing themes are cold - there is not much fuel to heat anything - and hunger - there is not much food to feed the starving populace.  People disappear in this story, but not in a nefarious way, rather, they just quietly give up and wander away into the countryside to die.  You have to read Church slowly, or you might miss the quiet despair that lies under the carefully shrouded plot.  He's  good writer, and his prose aims to convey this sense of uneasy ignorance that must permeate North Korean society.

Because really, what the hell is going on?  Only O knows, apparently.  Often in these stories, one is dropped into the middle of a conversation, or place, and have no idea how one got there or what is going on.  I guess that is how life is in the shadowy security world of North Korea.  One minute O is being threatened by some thug from Central in his Pyongyang office, the next he is sitting on the shores of Lake Geneva, having an ominous chat with the head of Swiss counterintelligence (whom we don't actually know is the head of Swiss counterintelligence, we find that out several pages later when he pops up again.)  The plot also has a mysterious foreign visitor who may or may not be important, and a dead woman (there has to be someone dead), and bits of meaningful information are offered in conversation but without words.  Here is an example of how it works in an O novel:
"'I don't want to be assigned there.  I want to know what's going on.'
'Of course, you do.  Every crummy sector cop in the capital needs to know what is happening in an isolated, out-of-bounds county on the east coast.'  She snorted, which was never her best noise.  'Don't ask me.  It's military, and they keep us out.  That's all I know, and if I knew anything else, you'd be the last person in the world I would tell.'  She was lying, very openly, which was the only way she could tell me what I wanted to know.  Amazing!  As angry as she seemed to be after all of these years, she was willing to help."

How does O know she is lying?  How do we?  I don't know, I just have to take his word for it.  There is a lot left unsaid in an O novel.

After a while this inscrutableness (?) gets kind of exhausting.  Don't ask me to tell you what happened in the earlier books in the series, since I really can't remember - maybe I am not supposed to!  No one ever seems to know what is going on in these novels, at least, that's what they want you to think, unless they are a high up from another Ministry or the Party or Central, in which case they know about something that they think is really important.   And it may or it may not be important to our "plot" but it will certainly have something to do with our reluctant police officer, O.  Still, Church offers a refreshing, if not particularly reassuring change of pace from my usual European-based crime fare.

I should note that I am reading Bamboo and Blood at the same time that I am reading Graham Greene's Travels With My Aunt.   It is a pretty bizarre juxtaposition, and I have a lot to say about the latter but that's for another time.
Posted by Splendid Spatula at 8:15 AM No comments:

Splendid Spatula
Cambridge, MA
The Splendid Spatula really has nothing to do with crime fiction, which is the focus of one of my blogs, but a little to do with travel, which is the focus of my other blog. On the crime front, I like international, pre-modern (meaning pre-1990s) stories. I tend to stay away from contemporary tales, those set in the US, and anything with too much romance. I also really dislike cutesy mysteries, but have a weakness for strong atmosphere, and if there is good food involved in an appropriate manner, well, you had me at hello. I do most of my reading in the tub, or in bed, or before taking a nap on the couch. The travel blog is actually just a collection of my travel journals, which some may find moderately entertaining or useful in planning their own adventures, especially if you like to eat or have small fry. Splendid Spatula is my internet handle, and is blatantly plagiarized from the title of a long-ago New York Times Magazine article about fishing and cooking with Ted Williams.